This has been a fantastic year for Stow Pipe Band a real ‘show case’ year, we have managed to get two competing bands out in 2014. As you know we set up a Stow Pipe and Drum School here in Stow some 3 years ago and this year those pupils have competed in their first […] 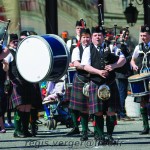 Stow Pipe Band have recently returned from another successful trip to Cholet in France. We took part in the ‘Carnaval de Cholet’ along with many bands from Europe. We were cheered and covered in confetti along the whole carnival route. The organisation and hospitality we received was fantastic. Stow Pipe Band would like to invite […]

You may have heard of the success of the Pipe Band at competitions over the last 2 seasons, World Champions in 2011 in Grade 4A and this year Scottish Champions in Grade 3B! This is mainly due to Stow Pipe Band joining forces with Hawick pipe band to form the Scottish Borders Pipe Band. The […]