Twenty two joined the annual bus trip venturing down to Whalton Manor, nr. Morpeth. This is a private garden, which Mr. & Mrs. Norton only open to groups like our own. We were fortunate that the rain cleared for about an hour to let us enjoy the gardens as they are meant to be enjoyed however whilst having our picnics the rain started one more – although this did not deter those outside as the summer house and umbrellas were put to good use. 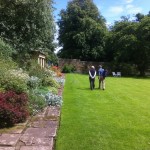 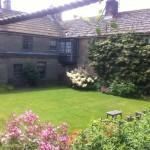 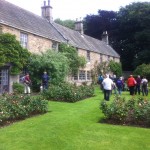 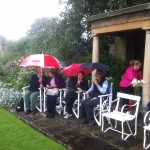 The old Manor House had been converted by Sir Robert Lorimer originally, followed by Sir Edwin Lutyens with Gertrude Jekyll designing the gardens in the Arts & Crafts style. However the latter have been changing since the 1950’s but there is still evidence of some very old, prolific roses around the house. We were treated to displays of different varieties of herbaceous plants, which produced most colourful displays despite the inclement weather we have been having and an errant rabbit.

What was not at first evident, was the full extent of the gardens – as we went round another door opened into a new section or one tier sloped down to another. Each area had a summerhouse or sitting area where you could just sit and relax. The large greenhouse was envied by many of us. Judging by the amount of foliage in the bus on the return journey many of the gardens in Stow will be displaying plants from Whalton Manor in years to come – even although one of the plant sales table was out of bounds due to a nesting pied wagtail! Hopefully we will see examples of these plants in future Flower Shows!

Talking of which, our next event will be the Annual Flower Show, held on Saturday, 1st September. The schedule can be found on here or in the Stow Post Office. It is hoped that despite the poor summer we can put on a good display but this can only be done by people entering. If you have never entered before it does not matter as committee members will be able to assist you on the Friday evening before the Show or the Saturday morning, before 10.00. Vases are supplied for flowers and there will be some paper plates etc. available for baking and fruit if required.